"I want people to not look at CMT as just a ‘musical theatre program’, but as a valuable training ground that helps kids build life-skills. And building skills in kids is invaluable.” 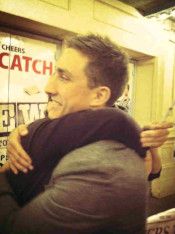 Cory grabs a hug from CMT alum, Caitlyn Caughell, following her performance on Broadway in Newsies. 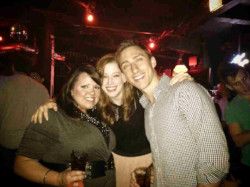 More "Stories Beyond the Stage" 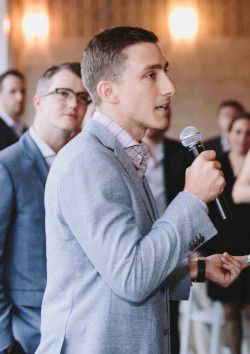 Cory exudes confidence when making presentations to groups as a marketing professional at Tyson Foods. Being calm in front of a crowd is a skill he learned while a member of the main-stage summer musical casts for 4 seasons.  Beginning in 2000, Cory discovered his summers could be filled with music and dance and having fun. But it was later in life he discovered CMT actually prepared him for more than being in a summer musical … it prepared him to be a member of a high-level marketing team that interacts on a global stage.

Being part of 4 main-stage summer musicals, beginning in 2000 with Cinderella, as the Herald, and ending in 2003 with the Sound of Music as Captain VonTrapp gave him a variety of performing arts education and performance opportunities. But not all the roles he was cast in were leading roles with speaking parts. He was cast as a TREE in the 2001 production of the Wizard of Oz. “I was disappointed that I didn’t get cast with a speaking part or a role”, he says. “But I realized that as a member of an ‘ensemble’ I was part of a team that made up the story. If I wasn’t doing my part as a tree, the story wasn’t complete.”

“I’ve discovered careers are not linear. Ultimately disappointments help us become a more well-rounded person.  Now, as a professional who works as a member of a team, I continue to ask myself the same questions I asked myself when I was a TREE  in the Wizard of Oz  … ‘what is the value of what I am learning. How will this make me a better actor (or person)?’  There is so much to be gained from a variety of experiences and disappointment is one of them.  Initially, I was disappointed that I was cast as a TREE in that summer musical, but now I know going through that experience did in fact help make me a better person and I draw from my CMT musical experiences even now.”

These main-stage summer musical experiences prepared him for a bigger stage and a global audience, something he wants the next generation of CMT musical theatre enthusiasts and supporters to embrace.  “The value from CMT is long-term. The experience gives you an ability to communicate and be part of a team. Those things translate to anything you do in life. The value you receive early in life helps you no matter where you go and what you do. Many kids get left behind, and understanding how to communicate and be part of a team helps give kids a head start in life. I want people to not look at CMT as just a ‘musical theatre program’, but as a valuable training ground that helps kids build life-skills. And building skills in kids is invaluable.”

Cory works for Tyson Foods as Senior Associate Brand Manager, Chicago, IL.  In his position Cory focuses on marketing innovation for Tyson, identifying how to grow and pursue the business. This high level marketing position gives him an opportunity to present on an interpersonal stage in front of audiences ranging from a few to hundreds.